Napoleon and His Artists – a lecture by Barry Venning

This thought-provoking and informative lecture by Barry Venning had been particularly chosen by our lecture secretary as last Wednesday was the 200th anniversary of Napoleon’s death on St. Helena.

Barry took us on a journey through Napoleon’s career through the work of artists, many of whom were chosen and directed by Napoleon for propaganda purposes. In fact, as Barry told us, Napoleon was the first leader to use visual arts for this purpose. As Anne-Louis Girodet ( whose painting below is of Napoleon’s father ) said ‘We were all enlisted but not all wore the uniform’ 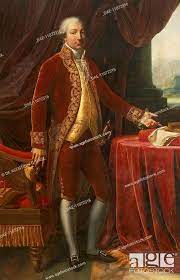 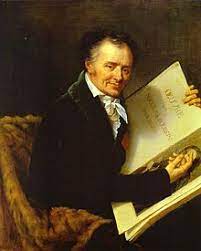 The portrait by Louis Charles Auguste Couder shows Napoleon visiting the Louvre. In fact the Louvre was built to house all the objects that Napoleon had ‘acquired’ during his campaigns. Barry told us the if it wasn’t bolted down Napoleon took it !! 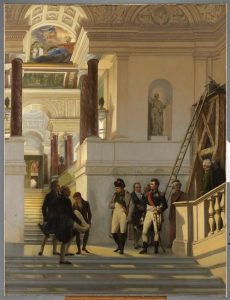 Napoleon won his first battle at Lodi and the drawing below celebrates this moment and is by Bacler D’Albe who became Napoleon’s cartographer. 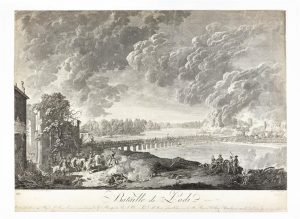 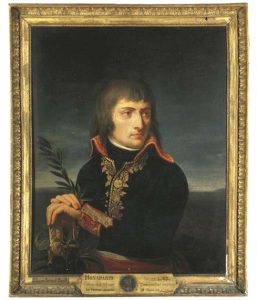 The paintings commissioned by Napoleon didn’t always correspond to reality or likeness, for example the painting by Baron Gros of Napoleon after his second victory at the Bridge at Arcola shows him bearing the standard but in fact he had slipped as he began to cross the bridge and was very muddy and therefore someone else was appointed to carry the standard ! 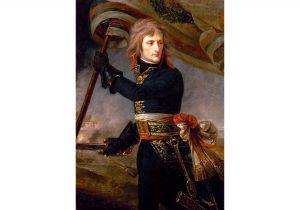 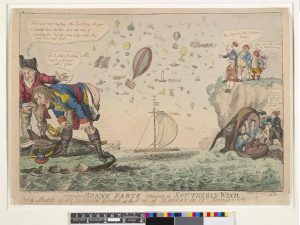 Napoleon couldn’t invade Britain because of Nelson so he decided to invade Egypt to cut off the British link. One of the items stolen was the Rosetta Stone which in fact was finally brought to Britain by the British.

There were then two disasters – one was the slaughter of all the people who had surrendered and the other was an outbreak of the plague amongst the troops and his orders to kill all the infected troops. Napoleon commissioned a propaganda painting by Baron Gros (1804) of Napoleon visiting the sick in the Plague Hospital designed to make the French forget the two disasters. 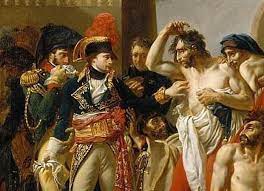 Vivant had said exactly what should be in the picture and rather than showing Napoleon carrying a patient ( which is what happened ) Napoleon is seen touching a stricken man suggesting a likeness to Christ healing the sick. This was an engraving and hundreds of copies were made and circulated around France. Some of the troops were captured by the British and recounted what actually had happened.

Josephine introduced Napoleon to many artists including Antonio Canova who was the greatest artist of the time.

In 1799 Napoleon left most of his troops in Egypt and returned to France to stage a coup to become the First Consul, as shown in this painting by Baron Gros in 1802 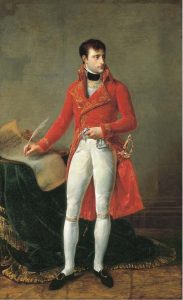 Barry pointed out the  interesting details – for example Napoleon pointing to a sheet of paper on which are written the names of treaties and battles he had won and underneath is the battle plan for the Battle of Morengo – known as Napoleon’s greatest achievement.

In 1800 Napoleon crossed the Alps to surprise the Austrians who had taken parts of Italy. the David painting shows a very heroic Napoleon but has no link with reality. Barry pointed out the names on the rocks – names of earlier heroes.. Apparently the instruction from Napoleon was ‘Just show me calm , on a fiery steed.’ 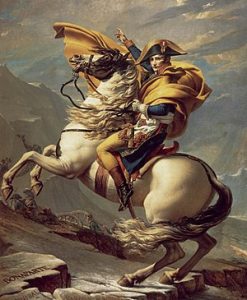 The famous artist Canovo did not follow instructions from Napoleon with his sculpture ” Napoleon as Mars the Peacemaker” and Napoleon was not pleased to be depicted in the nude and with a body far better than the reality! 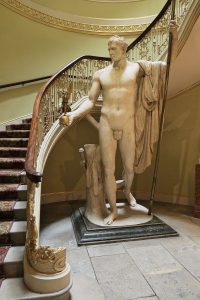 By this time much memorabilia was being made in Britain to allow people to express what they thought of `Napoleon!! 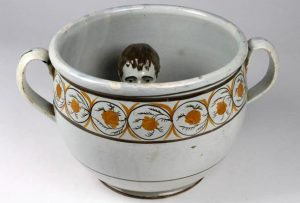 By now Napoleon was not being successful yet as Barry demonstrated, the propaganda paintings were there, as in this painting by baron Gros of ‘The Aftermath at the Battle of Eylau” A battle which really neither side won but strict instructions were given that it should show napoleon walking across the battlefield with the enemy reaching out to kiss his uniform, and wounded enemy soldiers being tended by the French. 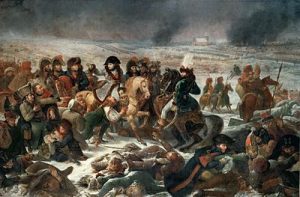 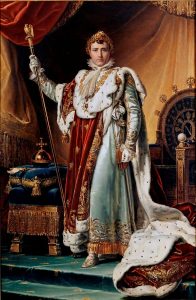 and in 1812 David painted a picture of Napoleon in his Study where he is shown as a man working for French civil society. Barry pointed out various details to show how hard Napoleon was working-  the ruffled carpet that indicated the Napoleon had just stood up, the candle and the clock indicating that he was working through the night and the document to show he was working on the Napoleonic code. 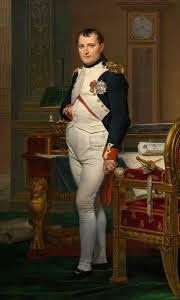 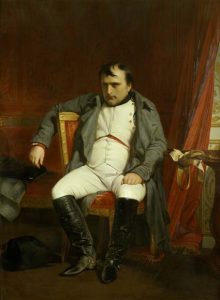 and in Britain the cartoonists had a great time as this Wilkie cartoon shows of ‘Chelsea pensioners receiving the news after Waterloo.’ 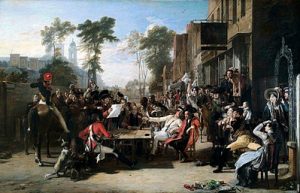 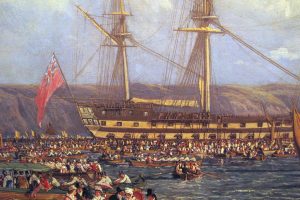 Locke Eastalake painted Napoleon on the ship Belaphron bringing him to Plymouth from a genuine sketch he had made. 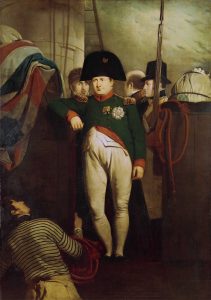 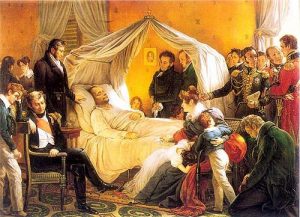 Barry told us that the French were still divided about Napoleon , however those of us who had listened to his excellent lecture were certainly united in our appreciation of  the knowledge that we had gained about Napoleon’s use of artists of the time. Something that I certainly had had no previous idea about. Thank you Barry for a most enjoyable morning.