Bhutan – Kingdom of the Thunder Dragon.    – a lecture by Zara Fletcher

Zara began her fascinating lecture by introducing  Bhutan to us as it was 60 years ago when there were no roads, no towns and no currency,(the only currency being textiles) and how, though there have been such big developments in all these areas in the last 60 years they have still managed to hold on to their cultural inheritance.

Zara then introduced us to the three key  figures in Bhutan’s history  who have been responsible for shaping the country as it is today.

The first was Padmasambhava 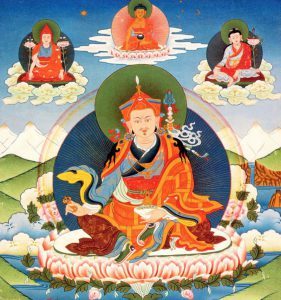 the second was Nawang Namgul 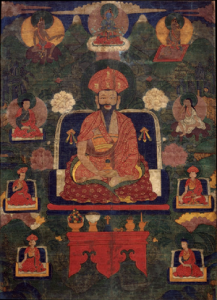 and the third –  the 4th king – Jigme Wangchuk

Bhutan, she told us is a small country the size of Switzerland but with a population of only 80.000. It has Tibet to the north and India to the south. It is divided into 3 different landscapes – in the north are the Himalaya, in the centre are terraced fields and this is where most of the population live  and in the south the land is very fertile and there are a few industries.

The country is home to a wealth of flora and fauna . The national animal of Bhutan is a takin – a rather strange looking creature 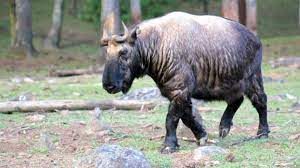 There is also great ethnic diversity in Bhutan – speaking 23 different languages , though the main one is English.

The earlier  religion in Bhutan was based on nature.  Budhism was introduced in the 6th. century  with its goal to eliminate suffering and attain enlightenment. The wheel of life is divided into 6 sections into which you can be reborn –  gods, demi-gods, humans, animals, hungry ghosts and hells.

When Budhism arrived in Bhutan art – in the form of murals, paintings or sculptures, was used to enlighten the people as most of them were illiterate. They work as a focus of faith and therefore had to be drawn following strict codes. For example the hand gestures would convey different meanings.Once these works were completed they would be consecrated with prayer.

At the centre of their beliefs is Avalokitesvara – the earthly manifestation of Buddha and shows compassion with many heads to see the suffering and many hands to comfort. 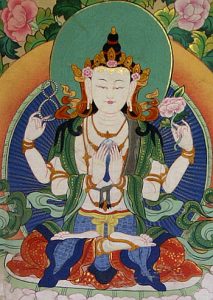 Shabdrung (1594-1651) brought peace and unification to Bhutan.He built dzongs across the country which were both religious and secular centres and are still in use today. 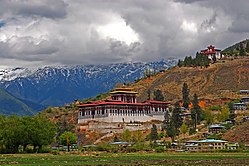 During the 17th  century Tibet made many attacks on Bhutan so Shabdrung  instigated codes of behaviour including dress and etiquette to create a difference between Bhutan and Tibet. It was known as the Driglam Namzha code and included such rules as the colour of the scarf (The Kabney) which must be worn indicating status, with yellow indicating the highest status 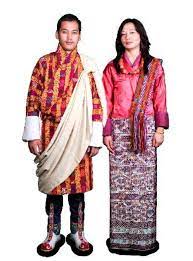 The women wear a kira with horizontal stripes 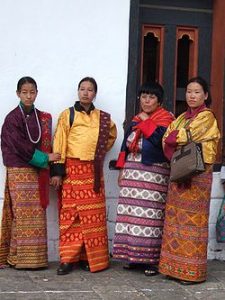 and the men wear vertical stripes – the Gho 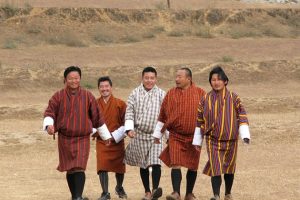 He also set up the Zorig Chusum which comprised 13 Arts and Crafts  which are symbolic and represent certain principles of Budhism – including weaving, sculpture and dance.

Creating Tashigomang – portable shrines. They  are  part of the Zorig Chusum and were  temples which consecrated and blessed the land around them and were resting places. 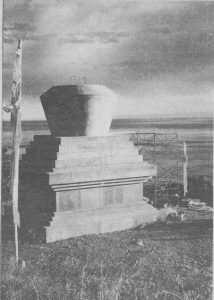 Another element was Jimzo – sculpting – as seen in this mask 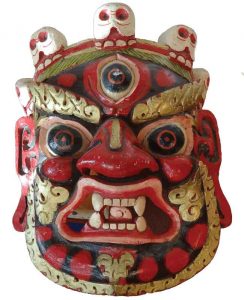 and Shingzo – carpentry – shown on this building 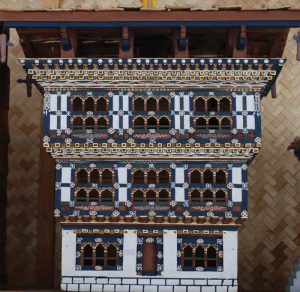 One very important piece of art are the Thongdrels or banners which were rolled down at festivals before sunrise ( so they would not be damaged by the sun ) and would be touched by the heads of worshippers. 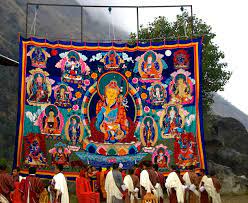 When Shabdrung died they kept his death secret for 50 years partly to maintain the unity of the country  but also because they were waiting to see the reincarnation. Much of what Bhutan is today is as a result of  Shabbdrung’s work.

In 1774 Britain sent a trade mission to Bhutan , which was rather inaccurately recorded in a painting by Tilly Kettle 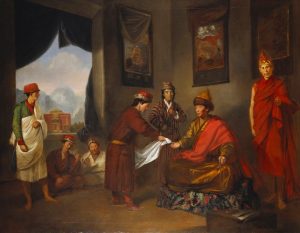 At the end of the 19th century Bhutan was racked by civil war and the British suggested the idea of monarchy. Ugyen Wangchuk became the first king , reigning from 1907-26 and he restored peace and stability. In the picture he is shown wearing   the  raven  crown. 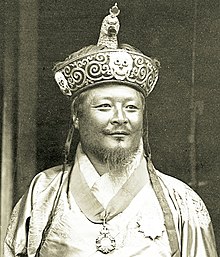 The raven is the national bird of Bhutan and at one time it was illegal to kill one. The raven represents the form of Mahakala – Bhutan’s guardian deity

The third king implemented his father’s dying wish and moved the capital to Thimphu as it was suitable for all year round living.

He was succeeded by his son – the fourth king – Jigme Wangchuk who developed the policy – ‘One Nation one Principal ‘ Wangchuck stated that it is the “distinct identity of our country”, and not the nation’s “wealth, weapons and armed forces”, that is the vital instrument in securing the sovereignty of the nation.  He said that everyone should wear national dress and speak their language.  As a result of this many of the Nepalese who had moved into Bhutan decided to return to Nepal.

He also made the  statement

is more important than

As part of this they were committed to :

The preservation and promotion of their cultural heritage

The conservation and sustainable use of the environment

Bhutan has free medicine, free healthcare and free education . The schools teach the Zorig Chusum ( the 13 arts and crafts)

They are constantly refurbishing temples to keep them fresh and bright. 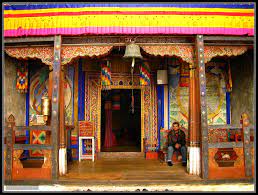 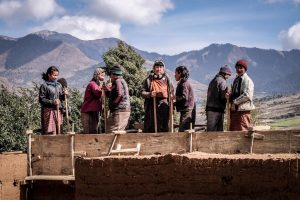 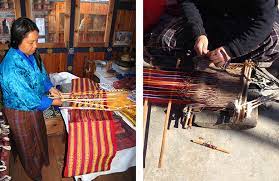 Thimphu -the capital of Bhutan has a National Textile Museum. 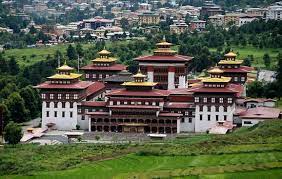 Dances are now recorded for posterity and are a central feature in the Bhutanese festivals which are attended by many of the Bhutanese.   In an amusing anecdote Zara told us how protective and careful the Bhutanese are of their culture and whilst most tourists respect it – some don’t so sometimes they give out the wrong date for national celebrations so that visitors are not present on the correct date!!! 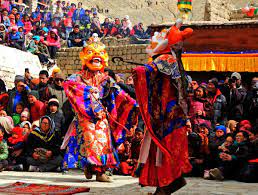 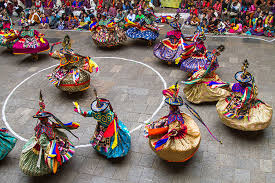 Bhutan was facing external problems from China and internal problems largely brought on by the TV and media. Initially he tried to ban some programmes but the worldwide web meant that this was impossible.One of the most important and ongoing works of the King involves Kidu, a tradition based on the rule of a Dharma King whose sacred duty is to care for his people.

Zara concluded this fascinating talk by reminding us of Bhutan’s very proud people, striking architecture and  strong Buddhism – I think we had all seen this through her talk. Bhutan is also understandably proud  of its  bio diversity and is the only country in the world  that is carbon negative.

It is seeking  to evolve as a contemporary buddhist society – a world which could teach us so much.

As we reluctantly came to end of this lecture many of us were already looking out passports and planning a visit to this magical place as soon as we can travel.