Everything is Art, Art is Everything. – Ai Weiwei.  -a lecture by Frank Woodgate

Frank returned to the New Forest for the fifth time to lecture us on Ai Weiwei, artist and activist.

Ai Weiwei was born in 1957 and was raised in the Gobi Desert under harsh conditions. His poet father Ai Qing was exiled there for sixteen years for his left-wing views.

In 1978, Weiwei enrolled in the Beijing Film Academy. And became interested in Western Art and belonged to an avant garde group called ‘The Stars’. Some of his colleagues were imprisoned as western spies.

Weiwei went to the USA in 1981 and learned English. He moved to New York in 1983. He dropped out of school and made a living from his drawings and menial jobs.

Ai Weiwei gave up painting in his 20’s and became interested in conceptual art, influenced by Jasper John, Marcel Duchamp and Andy Warhol. 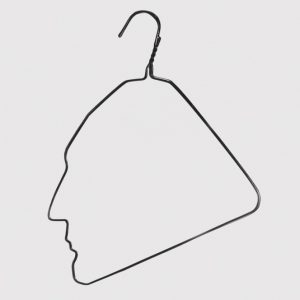 4. ‘According to What’ travelling exhibition put on by University. Homage to Jasper Johns (1964) 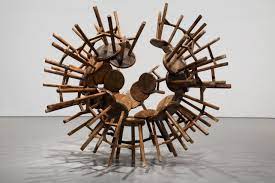 “Ready Mades”: ‘I am an artist, and I chose them.’ Some were controversial.

7. ‘5 Raincoats holding up a star’ this is a play on the stars in the Chinese flag.

9. ‘One man shoe’ (1987), which can’t be worn. Weiwei made the brogue himself, had learned how to fix shoes during his youth.

Weiwei returned to China in 1993 to visit his sick father. He produced art works that were controversial:

11.Below is an early work that possess Ai’s characteristic mix of hard edged critique, bravery and humour is this untitled photograph taken of his soon to be wife Lu Qing in Tiananmen Sqyare lifting her skirt up to the camera on the fifth anniversary of the 1989 massacre. 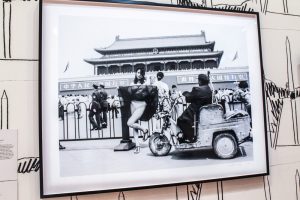 12. ‘Study of perspective’ (1995), middle finger extended in front of a picture of the Eiffel Tower, he did several more in different locations including China.

13. ‘Dropping a Han Dynasty Urn’ (1995), this was in a series of three photos to demonstrate how appalled he was by the destruction of China’s ancient culture. The vase was his own and the photos cost more than the cost of the urn now!

In 2014, Weiwei had an exhibition in Miami. A local artist protested by smashing one of the vases on display. The problem was it was not his own!

In 1999, Weiwei set up an architects studio called ‘Fake Design’, which has produced 40 buildings worldwide. He produced three books about Western art, which were circulated secretly.

17. ‘Oil Spills’ (2006) : Puddles were made out of porcelain and ‘alludes to the noxious environmental pollution caused by human activities at sea’. 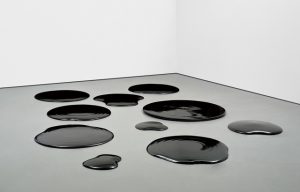 Weiwei made some pieces around metaphors using furniture: 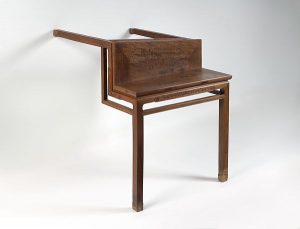 20. ‘Table and Beam’ (2007) representing oppression of state over proletariat. 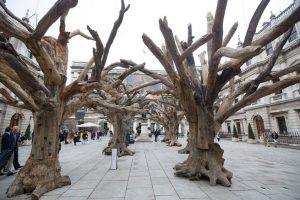 22. ‘China Log’ (2005) consisting of pillars from disused Chinese temples. It contains a map of China.

23. ‘Untitled’ (2006) This relates to the drawing by Leonardo Da Vinci on peace and harmony. 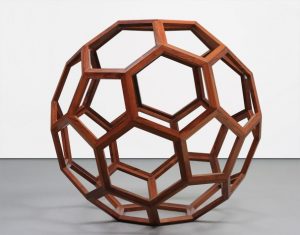 24. ‘Descending Light’ (2007). A vast red chandelier on the ground. In the film ‘ October’(1928) a chandelier vibrates representing Revolution. 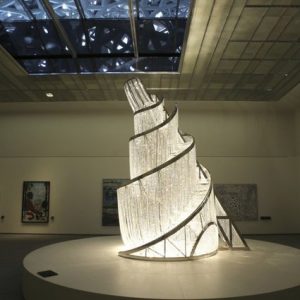 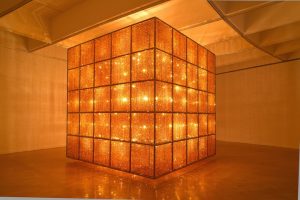 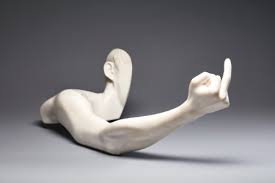 26. ‘Marble Door’(2007) there is no handle on the door, it symbolises being trapped in a totalitarian state.

27. Junkyard (2006) The doors represent the a massive nation with the individual (a door) versus the state. 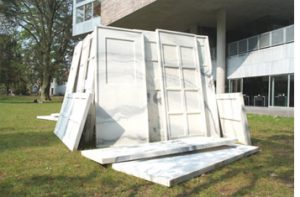 28. ‘Template’ (2007) At first, it was a standing sculpture, an octagonal standing snowflake shape made of cascading Chinese antique doors and windows. A windstorm blew the sculpture over and for some time, it rested that way outside. Weiwei decided to retain the collapsed form. It represented his uneasy relationship with his country.

In 2008, there was an earthquake in Sichuan, which caused multiple deaths (90k). A contributory factor was the modern buildings not designed to withstand earthquakes(jerrybuilding). The older buildings remained in situ.

Weiwei interviewed the local people. At this time China had a policy of one child per family. He drew up lists of the names of those who died. He produced a live artwork called ‘Remembering’ (2009) which consisted of 9k school rucksacks and another ‘Snake Ceiling’.The authorities were not pleased. He got beaten up by the police resulting in a brain injury. His brain was operated on later in Germany.

In 2009, renowned artist Ai Weiwei published an image of himself nude with only a ‘Caonima’ hiding his genitals, with a caption (“cǎonímǎ dǎng zhōngyāng”, literally “a Grass Mud Horse covering the center”). An interpretation of the caption was deemed offensive to the government.

Weiwei was placed under House Arrest in Beijing in 2011 for 81 days on trumped up tax charges. There were protests from all round the world. Donations were sent to him to offset the alleged debt. He hung a traditional lantern on the surveillance cameras outside his home.

29. ‘Sunflower Seeds’ (2010) This was exhibited in Tate Modern Turbo Hall but had to be closed after the first day. The sunflower seeds were made of painted ceramic, which unfortunately produced carcinogenic fumes when crushed. He built a studio in 2011, which was pulled down after his arrest.

In July 2015, Ai Weiwei was allowed to travel abroad. He produced an art exhibition at the Royal Academy.