Leslie began by sharing with us early images of the Maggi. This early image from the side of a 4th century Roman sarcophagus is very simple, showing no gifts –  no indication of gold, frankincense or myrrh. 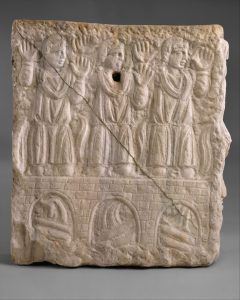 The name ‘wise men’ began because they were able to follow a star.

Paintings and carvings of the Maggi then began to show the three men walking in order of their age with the third man – the youngest –  having no beard.

By 1140 the three men have become Kings as on this stone carving – Leslie drew our attention to the clean shaven younger king  at the back. 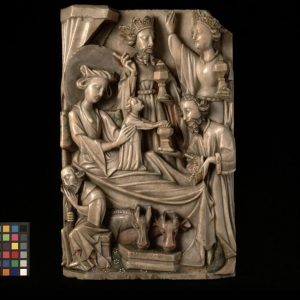 Paintings at this time show that the men are foreigners as they are shown wearing trousers. They are also shown wearing the Phrygian caps – caps that were worn by people who studied the stars.

Lorenzo Monaco’s painting in 1422 shows them not only as kings but also gives them halos. 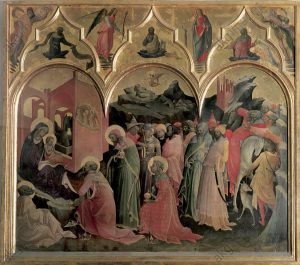 As it is in colour we can see that the older king has a grey beard. Also black people can be seen in the background as well as someone wearing the Phrygian cap so there are links between this religion and Christianity.. Not only was it monotheistic but it also had indoor rituals and a feast on december 25th !!

The adoration by Giotto in 1305 shows the oldest king balding and also there is the introduction of camels -(though not a realistic depiction ) possibly designed to introduce exoticism. The star depicted is Halley’s Comet. 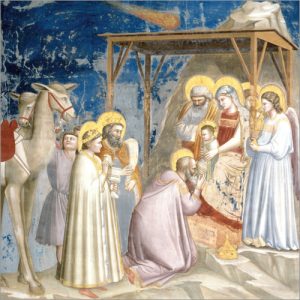 In 1430 Fra Angelica showed no halos but introduced peacocks which are said to have incorruptible flesh and therefore represent the resurrection. 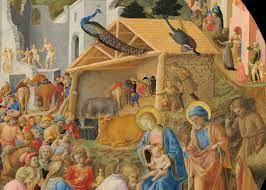 Benedetto’s  painting of the birth of Jesus is beautiful; there are no peacocks but there is the image of Christ on the cross 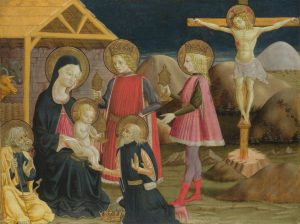 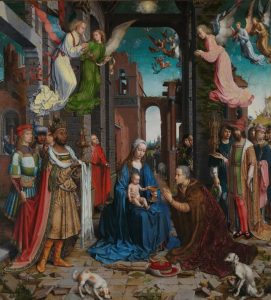 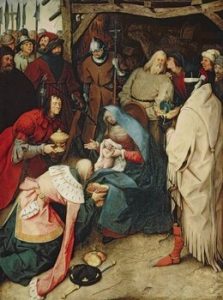 and Jakob Lozzano in 1560 shows a black king and the classical crumbling ruins indicating the idea of destruction of the Roman world and the triumph of the Christian world .

The gifts had symbolic meanings – gold represented kingship; frankincense represented divinity and myrrh was a prediction of his death. In Jan Gossaert”s painting in 1470 there were all the elements were included – gifts, soldiers, star. the holy spirit crumbling ruin and dogs . 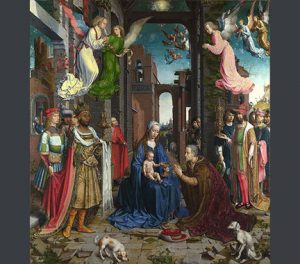 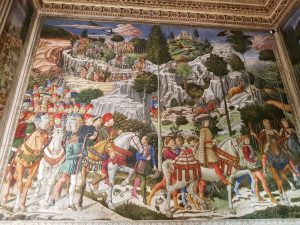 In 1475 Botticelli painted the adoration and on the eft are all the members of the medici family and on the right is the person who commissioned the painting. There is also a peacock in this painting. 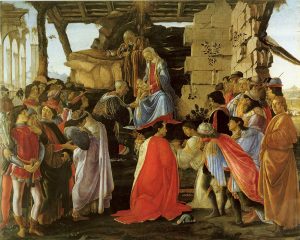 The painting by Rubens in 1624 shows Magi clearly from another country. 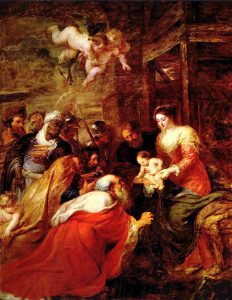 314 AD they were brought back and after being moved around from place to place, in 1164 they were finally put in the Chapel of the Magi in Cologne, where they still are now.

The lecture shows , as Leslie concluded ‘Images triumph over words”