Spencer Goes to War – a lecture by Carolyn Leder.

This lecture was well timed as it was just one  day after the 100th anniversary of the end of World War 1, so our minds were full of images of the war and  how the country was celebrating 100 years since the armistice. We were full of anticipation and expectation and we were not disappointed.

Carolyn began with a short introduction to Spencer’s early  life. He was born in Cookham in 1891 where his father was an organist and a rather bad painter and his mother was rather unconventional. He was educated at home by his sisters so he became quite a solitary individual. Both he and his brother received art lessons from a local artist and Stanley developed a passion for drawing. He then studied at the Slade from 1908-1912 under, amongst others,Henry Tonks.

Spencer was short and spoke rapidly, volubly and non-stop. He also wrote a lot.

In 1914 he painted this self portrait and interestingly he never painted himself in military uniform unlike some of his contemporaries .

Stanley’s attitude to war is remarkably different from other artists. He does not have the bitterness, nor does he glorify it. His aim is not to vilify but to redeem it, to make it whole. It is interesting how very accurate his paintings are, as in this painting of the travoys 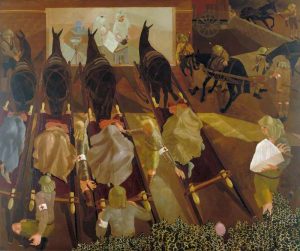 In 1914 he was keen to enlist but his mother persuaded him to volunteer for ambulance duties because he was not robust. He was placed in Beaufort War Hospital in Bristol. He had been brought up at home and he found this placement very hard. He was bullied and shouted at. After 13 months at Beaufort he was transferred to overseas duty in Macedonia.

All of his war pictures were suffused with spiritual feeling. He spent a lot of time reading the Bible. Spencer’s writing was at times waspish and at others quite poetic. Interestingly he wrote a lot about the mules used in wartime. Paintings by his contemporaries were much more brutal and harsh as this one by Sargeant entitled ‘Gassed’ 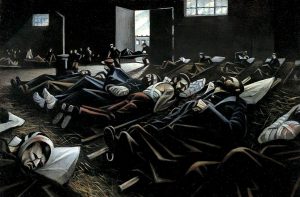 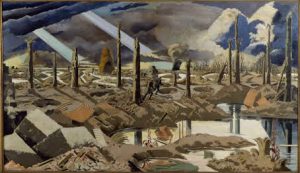 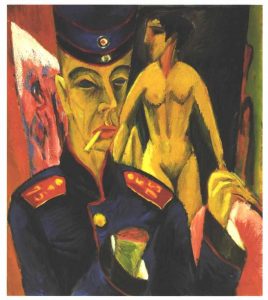 though much of this ‘self portrait’ was fiction as for one thing he didn’t have an arm amputated.

Max Beckman’s painting ‘ The Way Home’ from Hell shows just what Berlin was like after the war. 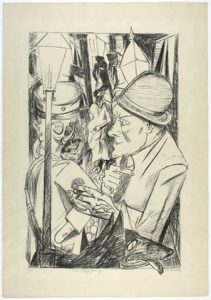 Spencer painted this self portrait in 1923 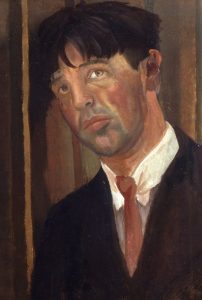 Spencer was commissioned to decorate Burghclere Chapel in 1927 and he wrote of the chapel – ‘they are all portraits of me but not self portraits.’

In the ‘Resurrection of Soldiers’ is at the end of the chapel  Spencer imagined the Resurrection of the Soldiers taking place in Macedonia with soldiers rising out of their graves and handing in identical white crosses to a Christ figure towards the top of the wall. Spencer said that working on the Memorial Chapel has been a six-year process of remembrance and exorcism. “I had buried so many people and saw so many bodies that I felt death could not be the end of everything.”..

Caroline ended this fascinating lecture with the rather strange story of Spencer’s second marriage. In 1937 he divorced his first wife Carline and married Patricia Preece but he never lived with her and she continued to live with her girlfriend Hepworth. Seen below in the wedding photograph – with Spencer in the glasses. 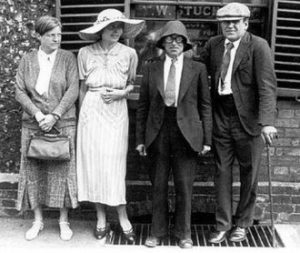