Edward Burne-Jones and the Pre-Raphaelite Legacy

a lecture by Alan Read .

Alan opened his lecture by asking us what image came into our minds when we thought of Burne-Jones – knights in shining armour? ethereal beautiful ladies?or monsters ?  Images that could mesmerise and repel in the same instant. He explained that he wanted to challenge the idea that Burne-Jones was the last of the pre-Raphaelites but more the beginning of the modernists.

Burne-Jones was described as the most intellectual of artists – but neurotic and melancholic. His studios were full of ‘unpainted masterpieces’, sketches and drawings which he would return to in time and work on them as he felt inspired. Some would lay for years before he completed them.

He was born in Birmingham into the ‘Jones’ family. He added the Burne from his aunt in order to give himself status. His mother died when he was only six days old and throughout his life he carried the burden of the hurt that he did at his birth. He read voraciously at school and had some art classes. He planned to go into the church but when he went to Oxford he met William Morris and thus began a lifetime of friendship and support. They both travelled to France and whilst there they decided on their careers – art for Burne-Jones and architecture for Morris. Burne-Jones in fact,  left Oxford without taking a degree. 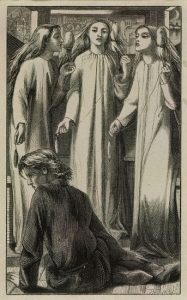 he said it was the most beautiful painting he had seen and sought to meet Rosetti. 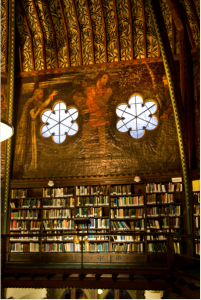 They all collaborated on these murals (1857-9) in the Oxford Union Debating Hall   based on La Morte d’Artur by Tennyson. Jane Burden was persuaded to sit for them. She later married William Morris, whilst Burne-Jones married Georgiana MacDonald 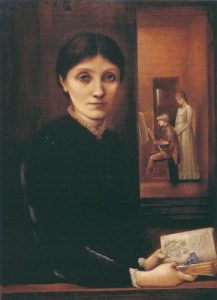 – who became his rock and indulged him throughout his life. The two families were very good friends as shown in this photo from 1874. 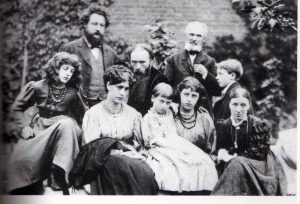 Burne-Jones said he could never have lived by his pictures alone and it was his work in stained glass that allowed him to lead a comfortable life. 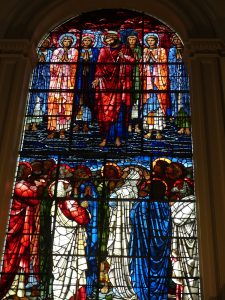 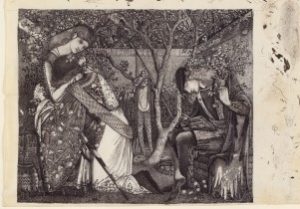 This drawing of ‘The Knights Farewell ‘ (1858) shows Burne-Jones’ fascination with medieval manuscripts , though it caused him to be unwell as he couldn’t cope with the smell of turps.

This watercolour which looks almost like an oil painting met with considerable criticism and it seemed as if it was going back to old beliefs. As a result it was displayed high up in what was known as ‘the naughty boys corner.’

Burne-Jones first painted this in black and white inside a piano and then returned to work on it much later. 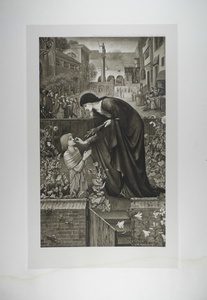 ‘The Prioresses Tale painted by Burne-Jones is at the very heart of his association with medievalism.

which has no real subject but was an excuse for a demonstration of harmony.

Phyllis and Demophoon again was criticised for several reasons. Firstly because it showed a woman making an advance to a man and also that it showed private parts. Burne-Jones  was asked to cover up them up and Burne-Jones refused and as a result he resigned from the Royal Academy   and had what he described as the best seven years of his life !! The painting had also been criticised because it was ‘too green!’

In ‘The Beguiling of Merlin’ which he painted in 1873, Burne-Jones compared it to his own position with his total infatuation with one of his models – Maria Zambaco 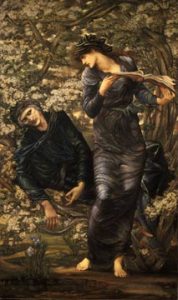 George Howard – 9th earl of Carlisle commissioned a painting ‘The Last Sleep of Arthur ‘ but when, after he had worked on it for many years, the Earl saw how much it meant to Burne-Jones he gave it to him.  Burne-Jones worked on this painting for 17 years and in fact was working on it the day before he died.

Alan concluded this very interesting lecture with a quote from one of Burne-Jones’  critics describing him as ‘a mediocre artist indulging girlish dreams.’ Was he just this ? Burne-Jones said of himself – ‘I want big things to do and large spaces in which to do them and for people to say on seeing them – Oh and only Oh ‘

Alan’s final  question – ‘was he the beginning of surrealism as his work was all about imagination and dreams and the subconscious? certainly gave us food for thought.Was he not the last of the pre-Raphaelites but the first artist of the 20th.century. With all his passion he was surely a modern of the moderns.  Alan had certainly given us plenty of evidence to support this view.