Caravaggio – The Master of Light and Shadow – Shirley Smith

This year was the 450th anniversary of the birth of Michelangelo Merisi. Born in Caravaggio, Lombardy in 1571, and as Shirley pointed out, his talent is still inspiring artists of today.

Shirley was keen to acquaint her audience with the religious backdrop at the end of the 16th century in Italy. Protestantism was spreading fast in northern Europe, and Pope Paul lll was considered the first pope of the Counter Reformation. He was tasked with upholding the structure of the medieval church, its sacramental system, religious orders and doctrine.

Caravaggio started his artistic career as apprentice to Simone Peterzano, and then moved to Rome where he painted many still life portraits such as 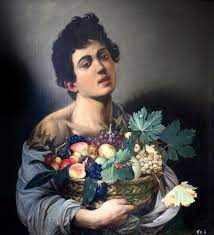 ‘Boy with a basket of fruit’, 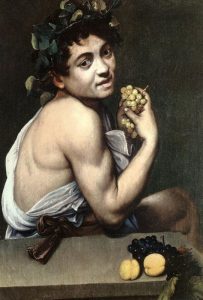 and a self portrait as ‘Sick Bacchus’.

An early patron was Cardinal del Monte, a leading art connoisseur , and through this connection Caravaggio probably gained his first commission to decorate the Contarelli Chapel in the French Church in Rome, with the ‘Calling of St Matthew’. 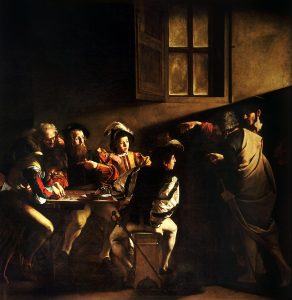 Caravaggio was hugely influenced by Leonardo da Vinci, and also Tintoretto using ‘chiaroscuro’ a theatrical use of light and shade. Although there were huge constraints on Caravaggio’s art, because of the religious Rulings of the Council of Trent, he chose to depict biblical scenes with extraordinary realism of ordinary people, detailing dirty feet or ripped clothing, alongside a wonderful talent of depicting facial emotion. This is particularly evident in ‘Martyrdom’, 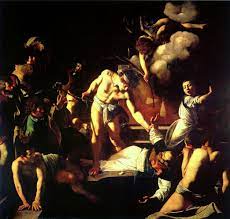 and much of his work shows conflict between spirituality and sexuality.

Caravaggio led a tempestuous and angry life, often in trouble with the law, yet despite this, he was commissioned many times to paint altar pieces for papal groups. 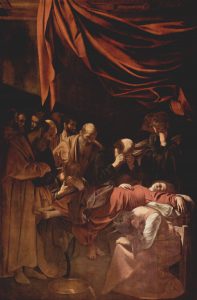 ‘Death of a Virgin’ was rejected by the Carmelites, as being too realistic, yet it was a much sought after piece with aristocracy and kings.

Caravaggio painted directly onto the canvas, without setting the scene, but always set the painting in small spaces, filling the canvass with the immediacy of the moment, unlike the Renaissance pictures which were set in vast spaces.

After being exiled from Rome for murder, he fled to Naples where he was commissioned to paint ‘The Seven Acts of Mercy’, 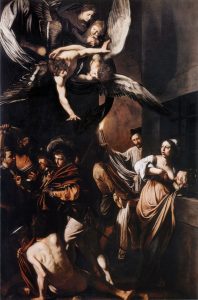 and his paintings were becoming much darker, with shafts of light highlighting the human emotion. Caravaggio made his way to Malta, where the knights commissioned him to paint the Grand Master Alof de Wignacourt, 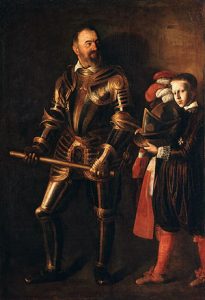 and also the famous painting hung in St John’s Cathedral in Valetta of ‘The beheading of St John’. 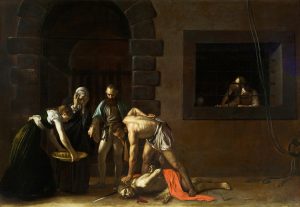 One of his final commissions was in Sicily, where he painted ‘Raising of Lazarus’, 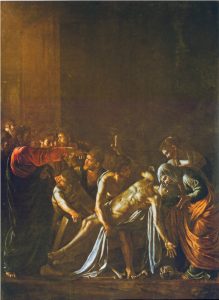 with the light struggling to penetrate the gloom, but there was still a vibrancy and immediacy within the paintings that people were drawn to.

Caravaggio died alone, back in Rome at the age of 39, but has had a huge influence on many painters over the centuries.