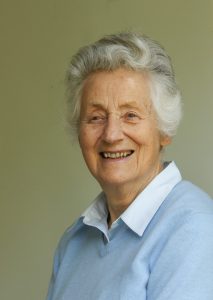 An Introduction To Our New President

Penelope Chitty – Her Time with NADFAS

During her time as Chair of New Forest DFAS a small committee raised £7000 for the publication of a colour and black and white catalogue for Southampton Art Gallery. In 1981 it was decided to elect an area representative and Penelope was elected as the first Area representative for Wessex.

In 1987 Patricia Hallett launched her card game of the arts – consisting of 52 cards with 26 different paintings and the aim was to collect matching pairs.

Although she did not officially take over the role until April 1986, Penelope had to deputise for Judy Waples in May and June 1985

May 8th.       Attended a NADFAS Tours Fundraiser at the Goldsmiths’ Hall -Fusing Forces

A fashion Show with Jean Muir

Penelope’s job was to chair the two Council meetings and the AGM, the Annual Directory of Lecturers meeting and  the lecturer selection sessions.

Penelope also attended a variety of National Celebrations and NADFAS’s 20th anniversary at Christie’s with the Duchess of Gloucester. In fact Penelope attended 18 celebrations of 20th, 15th, 10th and 5th anniversaries with receptions, dinners and lectures.

She also attended several private views of exhibitions – the Summer Exhibition at the Royal Academy, the Clore Gallery at the Tate, showing the complete Turner collection and the Francis Hayman Exhibition at Kenwood House and at all of these she was asked to make a speech.