Julian opened his lecture by comparing the very short time scale covered by  his talk  to the usual lectures which will cover decades – if not centuries!

He told us that there are many theories about what happened in Arles in 1888 between Gaugin and Van Gogh, but that the theory he will be putting forward may be quite controversial.

Julian told us how different in character the two artists were; Gaugin very confident 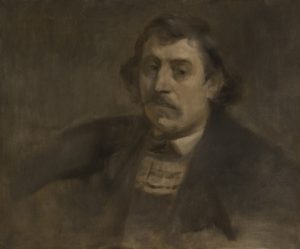 contrasted to Van Gogh who had a very insecure childhood shown below in Hatrick’s portrait of Van Gogh in 1887. 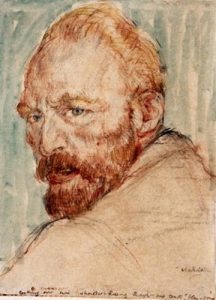 Gaugin’s grandmother was an early feminist and when he was a young boy Gaugin’s parents took him with them to live in Peru. They returned to Paris when he was 7. As a young man he joined the navy and saw much of the world before returning to take up work as a stockbroker. He was happily married to a Danish lady and started to collect impressionist paintings before deciding to paint himself. In the recession of 1881 he lost his job and decided to paint full time. This did not earn him enough to support a family and his wife decided to go back to Denmark with the children.

Gaugin joined an artist community at the Pension Gloanec in Pont Aven in Brittany where he became the centre of the commune. 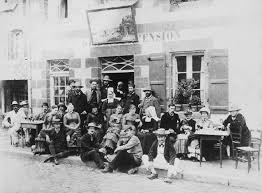 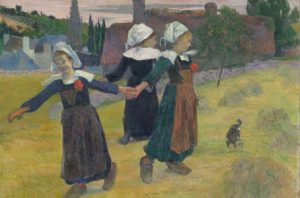 By the time Gaugin goes to Arles he is well known. His paintings were full of Symbolism like the paintings of Klimt – painting from dreams, painting from imagination,which is shown in his painting ‘Vision After the Sermon’ (1888) where we see again the Breton ladies but in a fantasy setting 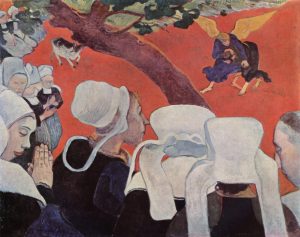 Meanwhile Van Gogh had been sacked from the family business for being too argumentative . They sent him to England to work as an art dealer but whilst he was there he took up art teaching. He had no idea what he was to do in the future and his brother Theo invited him to Paris where he met Toulouse Lautrec . He stayed in Paris for 18 months and as a result of seeing the work of the impressionists his work changed and became lighter and gentler.

Nobody really knows why Van Gogh went to Arles but at the beginning it was the happiest time for him but not necessarily the time when he did the best painting.  To begin with he stayed at the Hotel Carrel where he did many paintings. 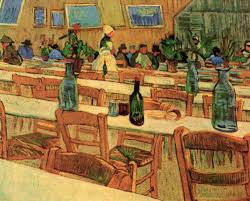 Van Gogh was a very fast painter- often completing a painting in a day, paintings full of light and happiness as in ‘The Bridge at Langlois”

Then he discovers the Yellow House and makes this drawing

It was an uncomfortable house with no bathroom but it was the first house he had owned. 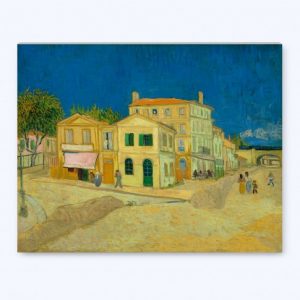 He invites Gaugin to join him and he arrived on October 23rd. 1888.

To begin with things went well but Gaugin tried to change the way Van Gogh painted. Julian showed us two paintings of the same scene one by Van Gogh and one by Gaugin to illustrate the difference in styles of the two artists.

VanGogh painting what he sees 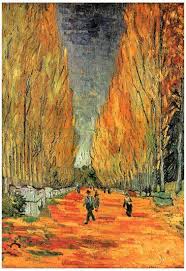 whilst Gaugin painted what he wanted to be there 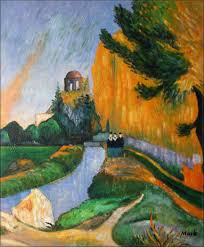 Van Gogh then begins to be influenced by Gaugin 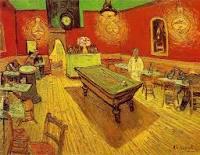 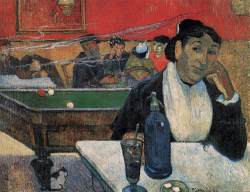 About two months after his arrival Gaugin writes to Theo (Van Gogh’s brother ) that although he respects van Gogh’s intelligence he can no longer stay with him as for three days they had argued and argued. Gaugin books into a hotel . Van Gogh cuts off his own ear and sends it to a girl . Gaugin thinks that this action must have killed Van Gogh but he had gone to hospital and they had patched him up. At this point Van Gogh paints a self portrait with the bandaged ear.

The question asked is why did he cut off his ear““? Was it a cry for help? Theo is sent for and Gaugin goes back to Brittany feeling very guilty as is shown in his self portrait where he portrays himself as a devil 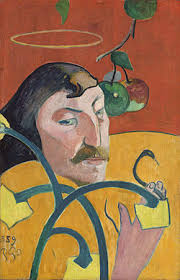 Van Gogh is moved to an asylum and though he said that Gaugin had no influence on him , the influence can certainly be seen in ‘Starry Night’ – more torrid and more introspective. 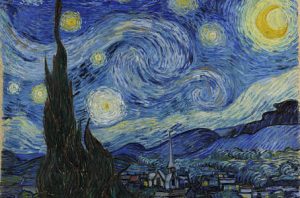 In 1890 Van Gogh moves back up north, which is a real disaster and the loneliness he felt can be seen in ‘Wheat Fields’

Theo died three years later and the brothers are both buried outside a graveyard.. 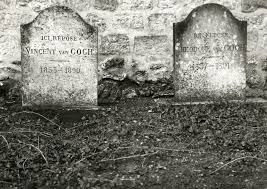 So the intriguing and informative lecture ended with Julian leaving  us to consider ‘What Really happened at the Yellow House in Arles ?’