Our second zoom lecture was outstanding. Douglas enthralled us with his presentation  and knowledge. It was our second lecture delivered through zoom and it went extremely well.

Douglas began by telling us that critics of Titian have said that all he did was to put paint on canvas, but he did more, so much more.

He was born in Pieve di Catore and went to the local school. The year of his birth is the subject of considerable debate- Titian himself, in a letter to Philip II of Spain, said it was 1474 but modern scholars put it at around 1488.

He was a good scholar but he didn’t learn Latin which meant in later life he couldn’t read stories in their original script. A local priest saw his talents and arranged for him to go to Venice to study with a mosaicist when he was about 11. A few years later he entered the studio of Gentile Bellini. Gentile was the first psychological painter as shown in his painting of  Queen  Catarina  Cornara ( 1500 ) (Fine Arts Museum Budapest ) where. the character  of the subject  comes through.  This  approach  to  painting  greatly  influenced  Titian. 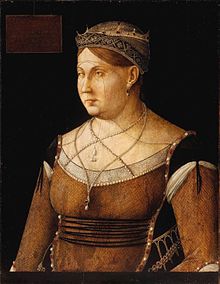 Titian fell out with Gentile and moved to his brother Giorgione Bellini’s  studio. Titian worked with Giorgione but was never his pupil. This is apparent when both Titian and Giorgione were asked to work on frescoes on the Fondaco dei Tedeschi ( the German merchants’ warehouse) but they worked on separate areas – and if Titian had been his pupil they would have worked together.

Titian worked in a way completely different from what then was the current manner. He started with colour and light and the picture was created on the canvas. . It was a completely revolutionary style. 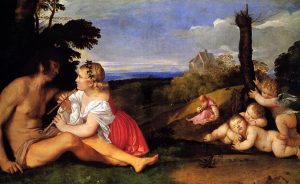 In The Ages of man (1514)(in Nat. Gallery Edinburgh) Titian’s use of dark and light is clear to see.

Titian always preceded his commissions with portraits as in his painting ‘Man with a Quilted Sleeve'(1509)(in Nat.Gallery) 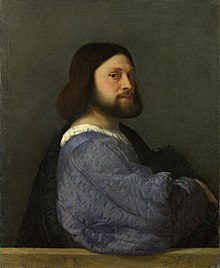 The painting is so simple yet makes such impact- with the contrast of the hard rock background and the soft voluptuous fabric and the play of light across the picture set against the darkness makes it stand out. However the most important aspect of the painting is the psychology and how he conveys the personality. By making the eye line higher than ours he makes him look rather distant and slightly threatening.

In ‘The Assumption of the Virgin  ‘(1516-18 )(in Basilica of Santa Maria) the position of the arms and bodies of the disciples lead the eye  to Mary. 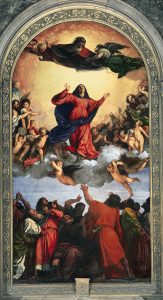 Titian creates an amazing spiral movement as Ariadne sees Bacchus in ‘Bacchus and Ariadne ” (1520-1523) (in National Gallery ) He has also made Bacchus’ followers very specific characters and looking like a tidal wave. This detail of the followers does not come from the original story (which Titian was unable to access as he had not learned Latin,) but came from a different story. The colours also go from warm to cold and light to dark. 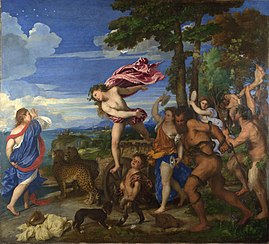 In the Bacchanal of the Andrians'(1523-26) (in Prado ) if you start with the wine, your eye is taken into a spiral down through the people to the baby peeing on the reclining lady. It was images such as this that caused the Victorians to dislike him as he was too ‘earthy!’ 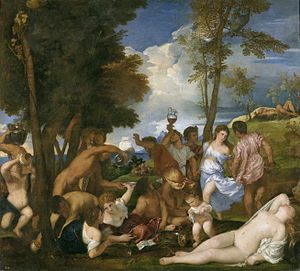 Pietro Aretino was a friend of Titian who wrote pornographic poems.  And in this painting of him  (1545)(in Pitti Florence)Titian brilliantly shows this man who was larger than life. 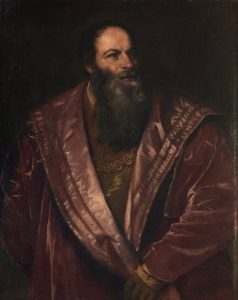 At this time Titian was becoming more and more acknowledged and successful. He  copied  a portrait of Charles V by Schleissinger but showing Venetian light and a softer  face. 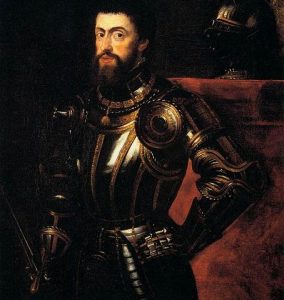 He then did the same with a portrait of Charles V’s late wife  and Charles is completely bowled over and becomes so impressed with Titian, buying many of his paintings.

Many important people became his patron. In 1542 he painted a portrait of Ranuccio Farnese for his mother,(now in Nat.Gallery Washington) 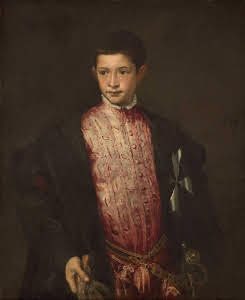 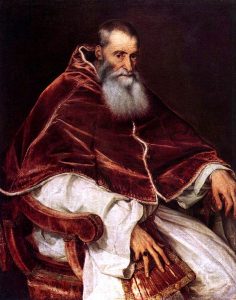 In 1545/6 Titian painted another portrait of the Pope with his ‘nephews’ (probably grandsons ) in which the Pope looks more brow beaten. This painting was unfinished but still shows how he achieved the amazing colour and texture of the cape. It also shows Titian’s skill at using psychological interpretation  in the manner and positioning of the  nephews and the Pope himself.(in Capodimonte  Naples) 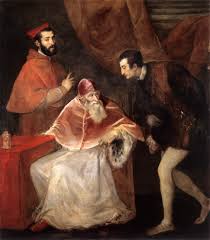 Michelangelo and Titian met and although Michelangelo expressed admiration to Titian for his work ,afterwards he said to Vasari that he liked his colour but not the ‘dessina’ in his paintings.

Charles V had increasingly become concerned that because he was so rich he would not enter heaven so in 1555 he entered a monastery but surrounded himself with Titian’s paintings. 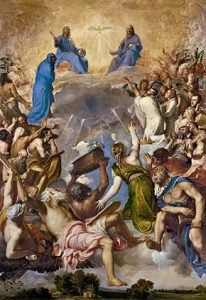 Phillip II who was the son of Charles V became Titian’s patron and Titian spent the rest of his life working on the mythological but rather rather pornographic paintings for Phillip, which he called Poesie. These can be seen  in  a variety  of  museums  around  the world   including  one in the Fitzwilliam Gallery  in  Cambridge 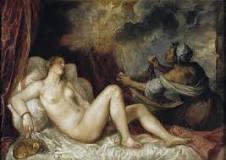 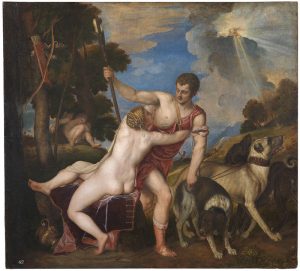 Evidence that Titian changed the figures directly on the canvas is shown in ‘Shepherd and Nymph’ (1570) where the shepherd has three hands! 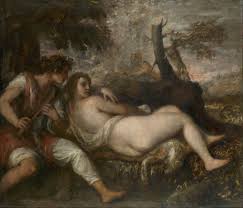 Pieta by Titian (1570) (Venice) was unfinished as he died before it was completed. It was finished by a pupil. 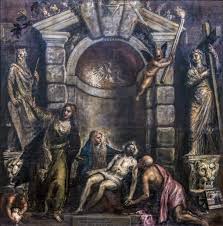 It was the picture Titian wanted hanging above his grave, but this never happened. Titian died of the plague and yet was buried in Ferrari – (the bodies of people who died of the plague were usually burned ) This was quite amazing and showed the status that Titian achieved – he had been raised  to the aristocracy.

Douglas ended this fascinating talk explaining how with the death of Titian it was the end of an era. And that without Titian the whole course of the history of art would have been so very different.

It was indeed a wonderful hour spent learning about and appreciating the skills of Titian. I for one will certainly look with renewed enthusiasm at Titian’s work.