Skip to content
Threads of History – The World of the Bayeux Tapestry
Lecture by Rupert Willoughby on February 14th 2022
Rupert Willoughby, historian and classicist, began his excellent lecture by reminding us how miraculous it is that this wonderfully vivid but fragile 1,000-year-old tapestry exists to this day. It is astonishing that it has survived for example not only the religious wars  of the mid 16th century in France but also the French Revolution. The ‘tapestry’ (from the French word tapisserie) comprises seventy-five scenes of wool-embroidered linen cloth, bearing Latin inscriptions. The last panel is missing and would probably have shown the coronation of William the Conqueror. It is 70 metres in length and tells of the the events leading up to the Battle of Hastings in 1066 and the Norman conquest of England by William, Duke of Normandy, noticeably told from the Norman perspective. The upper and lower zones include depictions of hunting and images from Aesop’s Fables, as well as scenes of 11th century life. Commissioned by Odo, the Bishop of Bayeux, half-brother to William the Conqueror,  it was used to decorate the Cathedral of Bayeux once a year. The eight high-quality dyes are still vibrant today. It is thought that the tapestry was made in Canterbury a few years after the Battle of Hastings. The design is likely to have been created by a team of English craftsmen, as the the Normans had no tradition of figurative art. The high quality of needlework suggests Anglo-Saxon embroiderers, whose work was prized throughout Europe at the time. They are likely to have been  high-born women, their fingers being more nimble than those of men. There is no evidence they were nuns, as has sometimes been suggested.
Image 1. 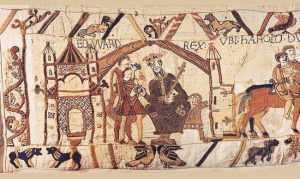 King Edward the Confessor with Harold Godwinson, Earl of Wessex. Edward wished William of Normandy to succeed him. Here he is sending Harold to France to confirm the pledge with an oath.
Image 2. 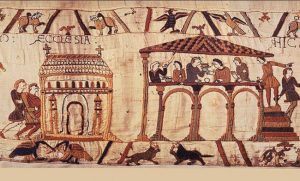 Harold and his brother enter Bosham Church. Harold is known to have acquired Bosham from the Archbishop of Canterbury by trickery. On the right,  Harold and his men are seen feasting in Harold’s house. Note the two drinking horns, one on the left and one on the right of the table. A cupbearer would be used as it was not possible to put the full drinking horns down. No drinking horns are shown at a later – Norman – feast. Thus the Normans are presented as being more pious and civilized and better to suited to rule than the uncouth Anglo-Saxons, who were known to drink heavily.
Image 3. 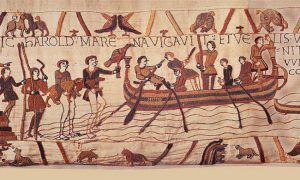 Harold boards a longboat to France. He is holding a falcon on his wrist. Harold was obsessed with his falcons and  took them wherever he went. It was a way of bonding.
Image 4. 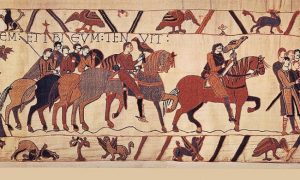 It is possible to tell the English and the Normans apart by their hairstyles. Harold has long hair and a moustache and so does King Edward (see image 1). In contrast to the English, the Normans wear their hair very short, and shaved at the back, practical for wearing a helmet.  They are also clean shaven. The Normans were offended by long hair “like women” and also by moustaches and beards.
Image 5. 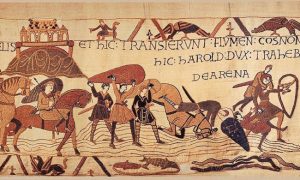 Harold and William got on very well. William invites him to Brittany. Here Harold is shown in a heroic light saving two men from the quicksand at low tide, one of whom he is carrying over his shoulder. Mont St Michel is seen in the background.
Image 6. 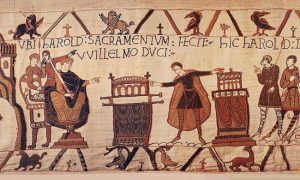 Harold swears a sacred oath on holy relics to Duke William. This oath is of major importance. By later taking the crown of England,  it implies that Harold broke faith with his liege lord and broke his oath to God.
Image 7. 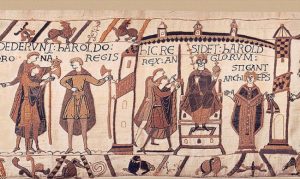 After Edward’s death, Harold is crowned King.  Stigand, the Archbishop of Canterbury is on his left. He was not recognized by the Pope and at an unknown date was excommunicated. It is made clear that for this reason the coronation was not valid.
Image 8. 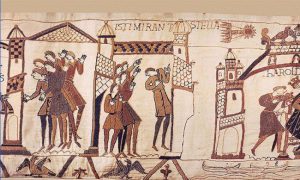 After the coronation in January, King Harold and fearful Englishmen watch the 1066 Halley’s comet streaking through the sky, as a portent of disaster and a sign of displeasure from the heavens. In fact, the comet appeared in April, 4 months later. 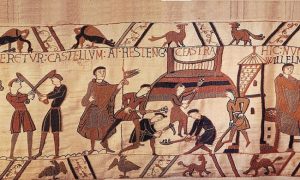 Fortifications are being dug at Hastings. Note the spelling, using ‘ae’ in ‘caestra’. A Norman would have written ‘castra’. In other instances in the tapestry, Edward is written AEdward.  These are another indication that the tapestry was crafted by the English.
Image 10. 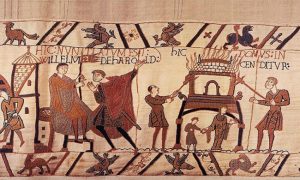 News of the burning of a house in Hastings by William’s men is brought to King Harold. A woman and child are seen escaping. This is an early example of cruelty to civilians. 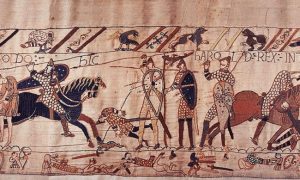 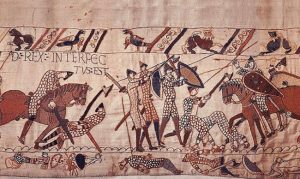 The end of the tapestry bears the words  ‘Here King Harold has been killed’ (HIC HAROLD: REX INTERFECTUS: EST). This could apply to several images here, including the famous one of Harold with an arrow in his eye. Is he also hacked down? Is he lying on the ground? It is possible all three depict the death of Harold.