A fascinating and most entertaining talk was given by Bertie Pearce on December 12th. 2016.

He opened the lecture by surprising us all with the information that in 2006 there was an Icon Debate to find the 12 cultural icons who represented ‘Englishness,’ and Punch was 6th.

History tells us that in May 1662 on the piazza in Covent garden , Pepys passed an Italian puppeteer with a puppet he called -Puccinella,

“Thence to see an Italian puppet play that is within the rayles there, which is very pretty, the best that ever I saw, and great resort of gallants.”

Before the year was out he had performed to the King. But tradition is older than that and an Italian puppeteer was working before this in Bath in Somerset

In the 15th Century the Commedia dell’arte in Italy would set up a stage and the performers would all wear masks apart from three.

One of the mask wearers was Puccinella- who was rude, vulgar and disgusting. Every country has their own Puccinella and in England he was known as Punch.

Punch ceased to be a marionette by the end of the 18th Century and became a glove puppet – representing a working man, but with a large ego.The whole performance was a rude and vigorous satire addressed at working class man. Punch represents those things which we think and feel but are not right.

There was always a preacher at these fairs so it was inevitable that one should appear in the Punch and Judy. There was also a clown based on Grimaldi and the policeman began appearing in 1829, the crocodile represented evil and therefore had to be beaten and there also  would be the jester from medieval times

The whole puppet show was a way of expressing thoughts ( often political ) which would be forbidden otherwise.

The very distinctive rasping sound of Punch’s voice was made by a small instrument called a swazzle.

It was the indistinct nature of this voice that resulted in Punch’s wife’s name changing from the original -Joan,( the name used for bawdy, low class ladies), to Judy.

Charles Dickens adored Punch and Judy and defended it when it was in danger of being banned for being too aggressive  and likely to incite violent behaviour, describing it in a letter in 1849 as

‘quite harmless in its influence and as an outrageous joke which no-one in existence would think of regarding as an incentive to any kind of action. ‘

The life of a puppeteer was hard and the Punch and Judy show was made for the hustle and bustle of street life. Landers and Mayhew  wanted to make statements about politics and hold people to account based on the French magazine Le Charivari  so ‘Punch’ the magazine was created. 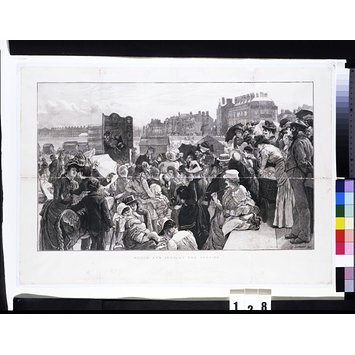 The crowd in the picture -‘Punch and Judy at the Seaside by Robert Barnes 1886 ‘ are gathered round a booth on the seafront at Llandudno, watching a performance by one of the Codman family. The first member of the family to have a Punch and Judy show was Richard Codman in 1850 At the beginning of the 21st century the fifth and sixth generations were still giving regular shows.

It was the Prince Regent  who really set the trend for the seaside association of the show, and in 1849 William Frith created a painting of Ramsgate Sands which showed the Punch and Judy booth.

Punch and Judy shows were performed to Queen Victoria at Osborne House and became regular entertainment in Victorian parlours.

Punch in the Drawing Room –

an illustration from The Graphic 1871

Punch the puppet releases our dissatisfaction with politics and the world

2 thoughts on “Punch and Judy”