Historic Gardens of the Italian Lakes – lecture by Steven Desmond.

This very witty and entertaining lecture was just what we all needed in grey January.

N.B. Please note that the pictures used in this review are not the ones used by Steven in his lecture as they were from his private collection. I have found similar pictures to illustrate what he was talking to us about.

Steven set the scene with a beautiful image of Lake Como in the early morning and explained that the climates in the two lakes he was going to talk about were not always as visitors expected. In the winter it was dry.cold and sunny; whilst the summer months could be very wet. He showed us how the light on the lake is often theatrical and mysterious as it is surrounded by mountains and therefore there is very little sun –  particularly so in the early morning. 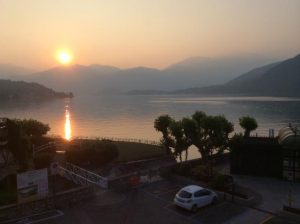 We were then taken on a beautiful tour of the villas and gardens of Lakes Como and Magiore. 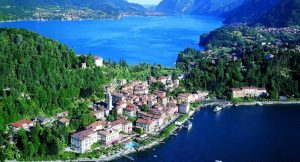 Belagio on Lake Como is home to Villa Melzi built in the early 1800s for Francesco Melzi who was Vice President of `Italy.  The villa was completed on 1810 and the gardens were created in terraces a few years later at the side of the house. They were in the English style and with an English statue even though at the time they were at war with England . 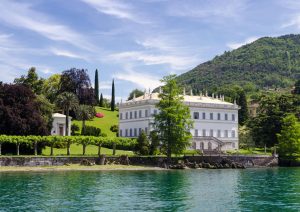 We then travelled to Villa del Bambinello which was built in the late 16th century. This magnificent villa is known for its picturesque gardens featuring flowers and trees which are the colours of the Italian flag: green, white and red, and it is only reached by boat. 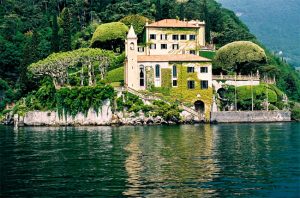 Then on to the Villa D’Este which was built in 1580 and its gardens have been described as ‘appearing to hang in the air.’ From the gardens this path leads directly up to the villa. 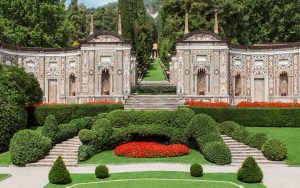 The next villa – Villa Cicognaga the garden and the villa were built simultaneously to have continuity between outside and inside,

The garden has a  with a famously long double staircase (156 steps) lined with cypresses and rising to a grotto. 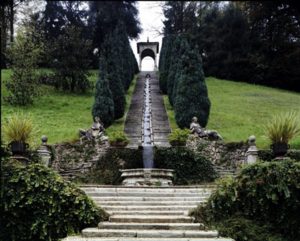 It also has a large rectangular sunken garden. 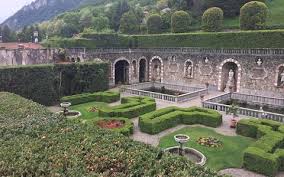 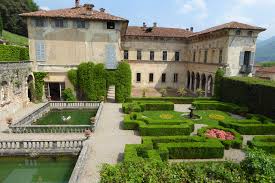 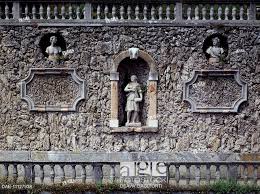 and the retaining wall is made from stalactites. 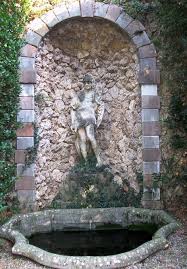 Steven then took us to Lake Maggiore and to the 17th Century Palazzo Borromeo surrounded by its magnificent terraced gardens. 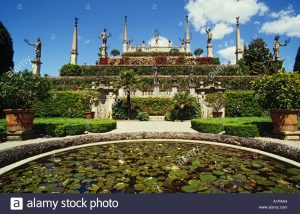 As you enter these gardens the baroque style in intended to knock you off your feet with the power it represents. There are statues representing the four seasons. 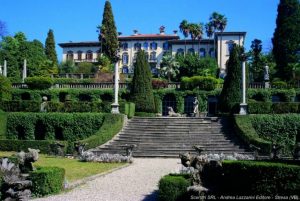 The Villa owes its existence to two lovers determined to create their “dream garden”: the Marquis Silvio della Valle di Casanova, a Neapolitan poet and musician, and his wife, the Irish painter Sophia Browne. They were determined to renovate a ruined villa owned by Sophia’s grandfather.

Flights of steps, avenues and narrow passages,  lead to the garden of the Hours, recalling memories of happy times past, the garden of Joy, full of bright colours, the garden of Sadness, with no flowers and no water, the garden of Memories, symbolising nostalgia for the past, and the garden of Sighs, where the spirit merges with the surroundings. The garden of Scent has a lawn made of thyme and the shrubs are myrtle. The park also has many  fine statues.

The villa became a meeting point of the Arts. 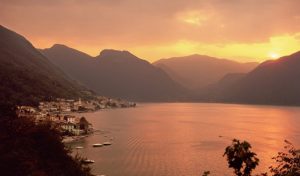 and for a while the greyness of January had been banished.