The Journey of the Magi: Origins, Myth and Reality – the true story of the three kings. a lecture by Leslie Primo 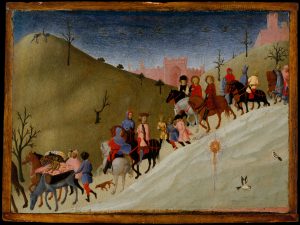 There have been pictorial representations of The Magi from as early as at least the 6th century, such as depictions in Byzantine ivories with origins in places such as Constantinople. Indeed, a vast array of artists, such as Hieronymus Bosch (c.1450-1516)Sandro Botticelli (1445-1510), Pieter Bruegel the Elder (active 1550/1; died 1569), Albrecht Dürer (1471-1528), Masaccio (1401-1428/9?), and Peter Paul Rubens (1577-1640) to name but a few, have been clearly fascinated by story and its possibilities when it comes to visual depictions. However, these depictions over this vast period of time have been anything but consistent. All the aforementioned artists will be mentioned in this lecture, as I seek to will unravel the myth and the iconography behind the proliferation of the story of the adoration of the magi from its Eastern and pagan roots to its current Christian interpretation. To aid my examination of this story, and to trace the changes in iconography and depictions of the kings themselves, I will be illustrating it with a variety beautiful works of art, images made across many centuries that will illuminate this fascination as never before. The lecture will begin by looking at the etymology behind the term ‘magi’ and how it has come down to us and what is now means in contemporary society. This lecture will then look at the changing iconography behind the depictions of the story and the various meanings behind these changes in its iconography, not to mention the changes in the story of the adoration of the magi itself. Moving on the lecture will then look at the origin of the names of the magi and the significance of their gifts to the Christ Child. Following this exploration of the fundamental roots of the story I will then come to the issue of the inclusion of the black king, where he came from, why he would be included, how significant was he and how European artists tackled the problem of depicting this magus when they themselves had little or no knowledge of such people of colour.   Finally, I will examining the actual origins of the story and how much of a bearing does that story, as we understand it, have on the actual story written in the Bible. To examine this final question, I will contrast the relevant passages the biblical with images from many sources to help clarify the difference between those and the example images. This final part of my lecture will set out to ask what it is we want this story to mean and why do we hold on to the legendary story rather than biblical tale in our mostly Western secular society.