Caravaggio: The Master of Light and Shadow a lecture by Shirley Smith 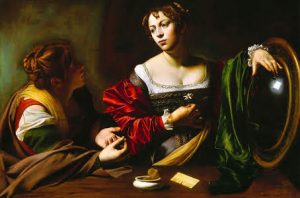 Michelangelo Merisi da Caravaggio was a man out of step with his time. Scorning the traditional idealised interpretation of religious subjects, he took his models from the streets, painting them realistically and heightening the emotional intensity by his dramatic contracts of light and shade. Such a revolutionary style was condemned by many as was his equally dramatic personal life and uncontrollable temper which involved him in endless brawls and even murder. This lecture will study the life and works of this enigmatic man and of his influence on later artists.