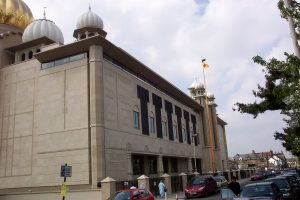 Appreciate the astonishing range of signature buildings of faith communities settling in London. New arrivals leave their imprint on a city – nowhere more so than in London where Jews, Muslims, Roman Catholics, Hindus, Methodists, Sikhs, Buddhists and Orthodox Greeks have each added their own layer. Not least, they have all left a remarkable signature. Here are eight faith communities which can each point to a special place they built, not on first arrival, but when numbers and self-confidence had grown in the knowledge they had established themselves for the long term. Crucially, it was when they had the wealth and resources to commission great architecture. So we have a synagogue, a chapel, a gurdwara, a monastery, a couple of cathedrals, a temple and a mosque, permanent markers of the highest quality. Their differences stretch across cultures and 300 hundred years of persecutions and economic crises. But their similarities are also striking.