Christopher Marlowe – Poet and Spy   A talk by Giles Ramsey on March 12th. 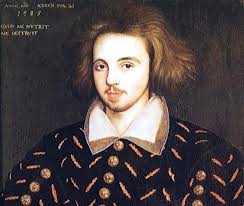 This is possibly one of the only remaining portraits of Christopher Marlowe dated 1585 – with the inscription ‘That which nourishes me , destroys me’ which was rather apt considering how Marlowe died.

I think many of us who attended this lecture  were rather unsure about the theme – not sure whether it was something which would inspire us. However it was a most fascinating, intriguing and informative lecture which left many of us buzzing.

Giles began by giving us some of the background to Christopher Marlowe’s life and times and explaining the significance and important role they played in shaping the path he took.

Christopher Marlowe was born in 1564 and lived through the Elizabethan Golden Age until 1593.

On August 23rd 1572 the Catholics turned on the Protestants in what became known as the St. Bartholomew’s Massacre. Elizabeth I was now living in great fear and needed eyes and ears everywhere. As a result brother turned on brother. Sir Francis Walsingham (Kings College Cambridge) had seen much of what Catholics could do, as he said  ‘There is less danger in fearing too much  than too little.’ 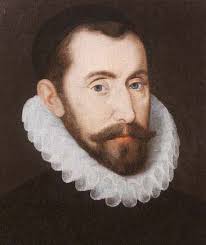 The threat was very real in England because of Mary Queen of Scots. Walsingham became one of Elizabeth’s most trusted allies and to show her appreciation she gifted a painting to him. This was a clever piece of propaganda. 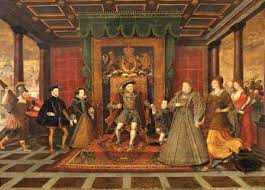 Walsingham  needed agents all over England and the rest of the world. One of these was Robert Poley – described as ‘a very bad fellow’  ‘a notable nave’ Sir Anthony Babington was sending messages to Mary through Poley but Poley was in fact a double agent and was working for Walsingham.

The English Ambassador in Madrid was a drunk and a gambler and he fed information to the Spanish. He was rumbled by Walsingham, but Walsingham left him there and fed him endless wrong information !

Into this world Marlowe was born in Canterbury and went to Corpus Christi College in Cambridge where he began to write poetry.His poetry was breaking all the boundaries including bringing in blank verse. Shakespeare was born in Stratford a few months after Marlowe and both writers showed what  inventive artists they were. 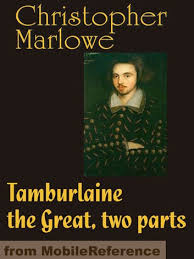 Tamburlaine was so successful that he wrote Tambourlaine II.

At this time Marlowe spent so much of his time away and saying how he supported the Catholic Church. In fact he was setting up his cover – ensuring that he was accepted and trusted by the Catholics.

Thomas Walsingham became a patron to Christopher Marlowe, Thomas Nash and George Chapman and lived in Seedbury in Kent, and it was there that  Marlowe continued to write.

Two other noted men were working with Walsingham – Ingram Frizer (his business agent ) and Nicholas Skeres ( a government informer) These two were also engaged in ‘coney catching’  – lending money to soft, gullible gentry who had lost money gambling. 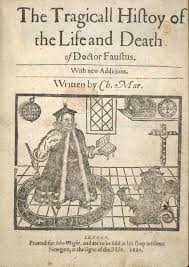 and ‘Edward II and His Lamentable Death’ 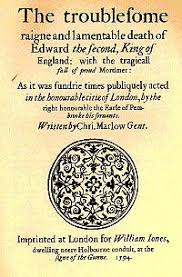 It raised the question – why did Marlowe write about the death of a monarch when the Queen was in danger? Was it asking the question -‘where do your loyalties lie- with state or religion?

His final play ‘Massacre at Paris’ included praise for the Queen who rejected papistry. 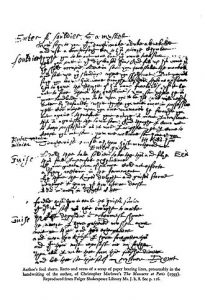 The Rose Theatre  simultaneously put on  plays by Marlowe and Shakespeare.

In 1593 a libel goes up suggesting that Protestant Englishmen should drive out Protestant foreigners.

On May 10th. the Lord Mayor offered a reward of 100 crowns for information on who was the author of this libel.  Kyd ( a writer,friend and former roommate of Marlowe) is arrested as the apparent author and tortured and he tells all about Marlowe. Marlowe is apprehended on May 18th and put on bail. At this point Richard Baines (informer and ordained  Catholic Priest ) began to rubbish Marlowe’s reputation with the so called ‘Baines note’

On May 30th Marlowe was invited for lunch by Ingram Frizer. Also at this lunch were Nicholas Skeres and Robert Poley. After lunch an argument  began which resulted in a fight and Marlowe’s death. His body was put into an unmarked grave in the church next door.

The question we ask – ‘Was it a set up or just a drunken fight ?’ The other three received pardons and pensions and Kydd and others continue to destroy Marlowe’s reputation. Friends rallied to his support saying he was ‘ one of the wiliest knaves that ever God made’

After the death of Marlowe the door was open to Shakespeare.

Many of us left the lecture with a greater  knowledge about the life and death of Marlowe and his role in the Elizabethan Golden Age with its circles of espionage and conspiracy,which seemed so similar to 2018! The lecture had been presented to us with such enthusiasm, knowledge and humour that many of us could have listened for much longer.