Celebrating the 250th Anniversary of the Royal Academy of Arts –

a talk by Pamela Campbell-Johnson 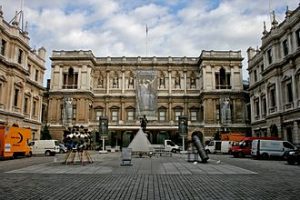 Pamela led us on a fascinating and informative walk through the history of the Royal Academy.

The Royal Academy was founded by James lll  in December 1768 by an act of parliament and to this day it remains true to its origin and purpose  i.e. to promote the creation, enjoyment and appreciation of the visual arts through exhibitions, education and debate.

Many know it from its Summer Exhibition, but it is much more than that. It is unique and Britain’s oldest gallery and the only one that is privately funded.

Its original home was in Pall Mall and then in 1771 it moved to temporary accommodation in Old Somerset House. In 1780 it was installed in purpose built apartments in the new Somerset House. This painting by Thomas Rowlandson and Augustus Pugin (1800) shows the Exhibition Room at Somerset House and how important the position of the paintings was – above or below the line  and there were many debates about the density of the hangings. 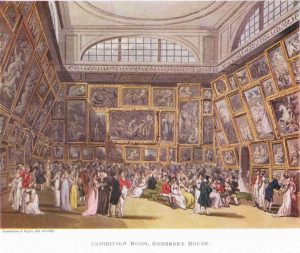 Many of the people attended the exhibition to be seen rather than to view the paintings. The exhibition was very important to artists as this was the way most of them sold their work. Another aim was to show paintings of young ladies about to be introduced to society.

In 1837 it was moved to the National Gallery but after just a few years the space proved to be too small for two institutions so in 1868 it made the move to its current home in Burlington House in Piccadilly.

There were 40 founding artists and over the years the number of Academicians  has increased until in 1991 it was set at 80 and Associated Academicians were abolished. Academicians must be professionals and active in the U.K. Amongst this 80 there must always be 14 sculptors, 12 architects, and 8 printmakers with the remaining places being filled by  painters. They are voted and elected by their peers. Once they reach the age of 75 they move to become ‘Senior Academicians’ who can still display their work but are no longer involved in the day to day running and leave their place to younger artists.

Artists submit their work for the summer exhibition and the hanging committee look at all of them and decide which should be hung and where. Once the sanctioning day has happened nothing more can be changed or moved.

This photograph shows the 1914 Hanging committee 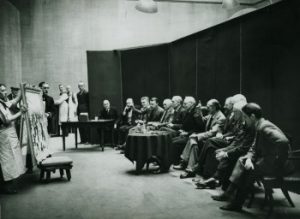 Academicians can show up to 6 of their paintings at the Summer Exhibition and their paintings do not need to be approved by the ‘Hanging Committee’. Artists can submit up to 3 pieces of work. Last year 13000 entered but only 1200 were chosen.

In 1870 a Winter Exhibition was set up celebrating the work of the Old Masters. In 1931 they started to embrace European Art and Cultural Exhibitions. These have included Exhibitions of Chinese Art in 2002, Living Bridges in1996 and one of the most beautiful in 1991 – ‘Icons of Russia’

Some exhibitions attract large numbers. In 1991 the Monet exhibition had more than 807,000 visitors.

In 1997 an exhibition entitled ‘Sensation’  displayed the work of 42 young British Artists – put together by Saatchi. This exhibition showed that the Royal Academy can display cutting edge art as well as the more traditional.

The Royal Academy also held the first 24 hour exhibition as a way of coping with the large numbers of people who wish to visit the galleries. This can not happen all the time as paintings need times ‘to be put to sleep’

In 2015 the steps of the R.A were painted as part of the Summer Exhibition 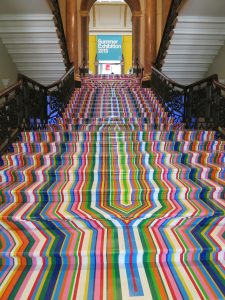 One of the most prized possessions is Michael Angelo’s Taddei Tondo which was bequeathed to the Academy by Sir George Beaumont. It was carved in Florence in 1504 and is the only marble by Michael Angelo in the U.K. and shows the Virgin Mary and Child with the Infant John the Baptist 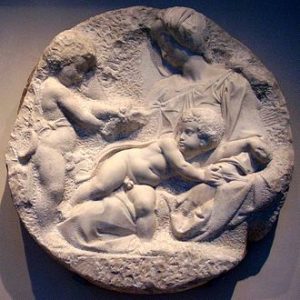 Galleries also borrow and lend between themselves. Temporary loan exchanges may last months or even longer. No money changes hands apart from the costs of installations. The Royal Gallery also lend from their permanent collections as every Academician must leave a painting. For example Constable left his painting ‘Leaping Horse’ 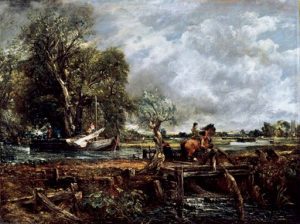 Sir Joshua Reynolds set up the first  training for artists at the Royal Academy  which still flourishes today offering three year graduate courses. In 1769 seventy seven  students enrolled and there was an average intake of 75 students a year.  These included Blake, Constable and Turner.

It was 1860 before women came to the school but two women were amongst the 40 founding artists but it was to be another 154 years before a woman became an Associate Royal Academician.

Sir Hugh Casson was a much loved director who bridged the gap in the 1970s between Modern art and the traditionalists.

Pamela concluded by telling us about the current plans for development. They will be building a link bridge to the schools and the Burlington gardens and new galleries. It will be the largest development since the Royal Academy moved to Burlington House.

The Royal Academy is aware that it needs to constantly rethink and remain relevant ‘ a reflection of who we are, where we came from and where we are going to go’

An interesting insight into the Royal Academy.