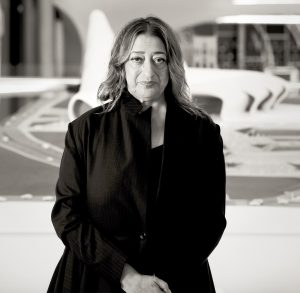 Anthea began her fascinating and informative  lecture saying that Zaha Hadid died suddenly in 2016 when she was at her peak – having 36 ongoing projects in 21 countries ! An incredible success story. She had been awarded a gold medal from the RIBA – awarded to people who have made a major influence on architecture. One of the distinguishing features of her designs was her  use of diagonals rather than the conventional right angles and this made architecture more exciting.

She was born in Baghdad to a wealthy family. At school she excelled at Maths and her family sent her to a boarding school in England. From there she studied maths at the American University of Beirut and then in 1972 she went to the Architectural Association School of Architecture, where she studied under Rem Koolhaus who found her an inspirational student. Her 4th. year project was a painting of a hotel in the form of a bridge,  inspired by the Russian suprematist artist, Kazimir Malevich. During the 1920s Malevich had made some white structures which he called Architecton which was a source of inspiration to Zaha. 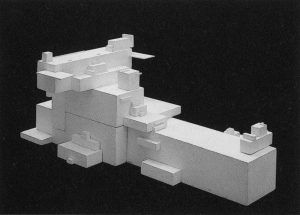 Zaha came top of all the students passing out from the School of Architecture in 1977 with this painting. The  hotel was designed to be on Hungerford Bridge and the links with Malevich’s Architecton are clear. 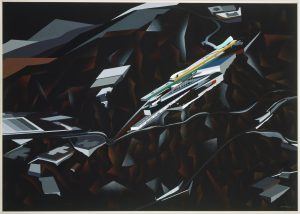 The use of diagonals in this design are clear to see.

In the early 1980s Zaha set up her own practice and in 1990 she received her first commission – to build a Fire Station for the Vitra Furniture Company in Weil am Rhein in Germany. 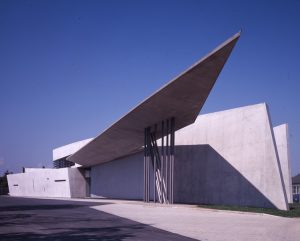 It was one of her first designs to be built but when it was completed in 1993 there was no longer a need for a Fire Station so a concrete wall was added where the Fire Engines would have been .

In 1994 Zaha designed the Opera House in Cardiff, but it was never built as the government decided not to put forward the money. 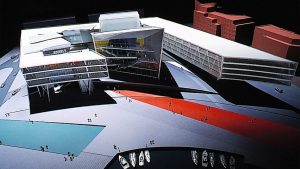 In 1997 Zaha won a competition to design a Centre for Contemporary Art in Cincinnati.

For this design Zaha won the Pritzer prize for Architecture.

In 1998 Zaha won a competition to design a Contemporary Art Museum in Rome which became known as the Maxxi. 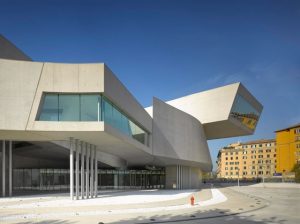 Where the interior is as breathtaking as the exterior. The theme throughout is one of a sense of movement and flow. 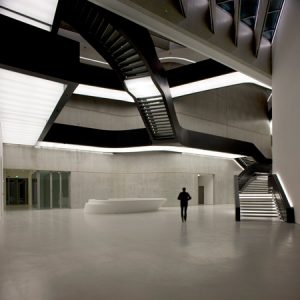 Zaha’s design for a new ski jump at Innsbruck was rather controversial as it stood out in strong contrast to the surrounding mountains. It was designed not only as a ski jump but also a cafe with a 360 degree view of the mountains. The design gives a sense of movement and speed. 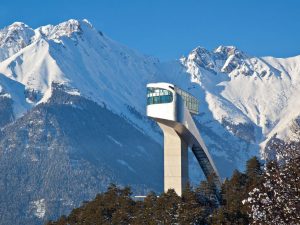 In 2000 Zaha designed another building in Germany – the Phaeno Science Centre in Wolfsburg. Zaha wanted the space underneath to be full of activity and each of the cone shaped pillars that support the building contains a shop, a cafe or an entrance. 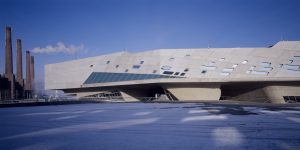 Then in 2003 -2010 her design for the Gangzhou opera House was built. Throughout  the whole design there were no right angles.It was comprised of two buildings – one contained the theatre whilst the other housed the restaurants and shops. 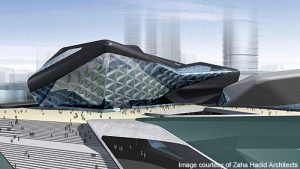 and again the interior was as spectacular as the exterior. 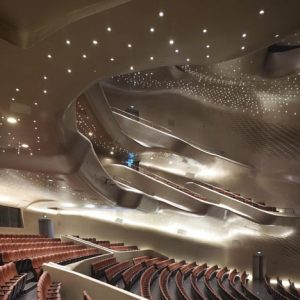 Zaha was commissioned again by Innsbruck to build 4 stations on the Nordpark Cable Railway – 2004-2007 The design  shows how Zaha’s buildings often had just minimal contact with the ground. 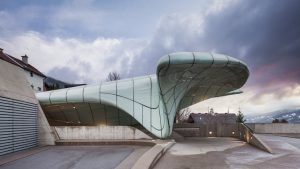 In 2001 Zaha designed the Maggie Centre at the Victoria Hospital in Fife. The hospital was for cancer sufferers and Zaha was keen to ensure that her design instilled calm and peace. 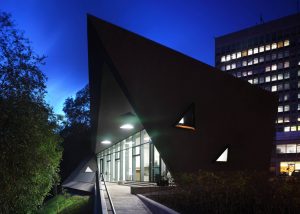 Another design by Zaha in Scotland was the Riverside Muse in Glasgow – with its non-uniform peaks and troughs. 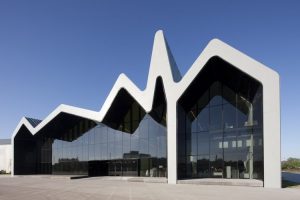 In 2006 Zaha was commisioned to design the Aquatics centre for the London Olympics. 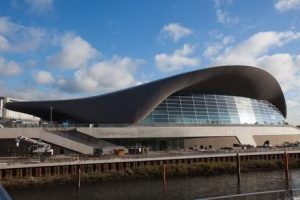 The building looked like a wave but extra seating had to be added for the Olympics but these were removed once the Olympics had finished. 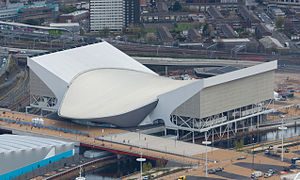 In 2008 Zaha deigned a building for the University of Economics and Business in Vienna, with  walls  sloping  at  35  degrees 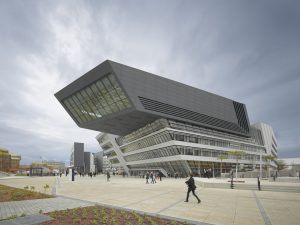 The wonderful interior was beautifully lit and the acoustics were very clever which meant that inside the building it was incredibly quiet. 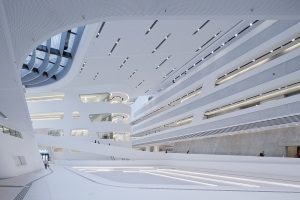 Probably Zaha’s most famous famous building was the Heydar Allayer Centre in Baku in Azerbaijan – designed in 2007. It was called her Queen of Curves. The people of Azerbaijan  were so proud of it and kept it beautifully. 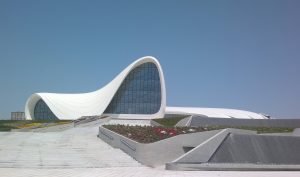 Part of the design incorporated wedges of landscaping . There was also a very unusual staircase with slithers of light, probably inspired by the work of Malevich. 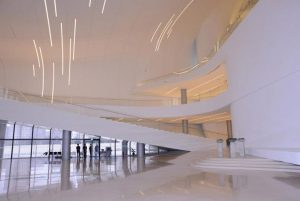 Another amazing interior was designed by Zaha for the Hotel Puerta in Madrid. 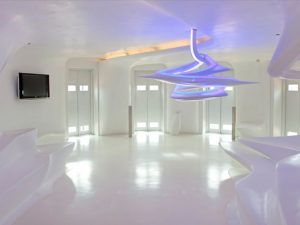 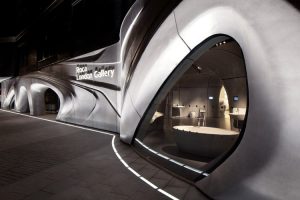 and her apartment in Miami. 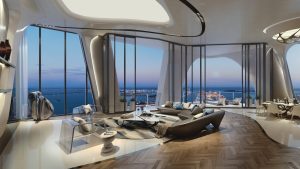 Anthea’s lecture gave us a very comprehensible insight into the work of an amazing architect. The lecture was made the more instructive by Anthea shoving us pictures of the buildings from many angles.

Zaha Hadid, as Anthea concluded, died suddenly at the peak of her career and was a great loss to architecture around the world. I am sure many of us will look further into Zaha Hadid’s work and if possible visit some of the buildings