And So To Vauxhall – Music and Culture at the Celebrated Gardens

a lecture by Peter Medhurst 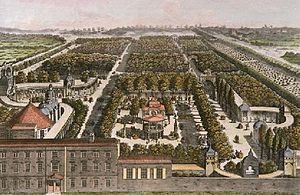 This fascinating lecture was further enhanced by Peter’s piano playing and singing and though he apologised for a croaky voice, we heard no evidence of it and found the whole presentation totally delightful.

Many of us knew little about the story of the Vauxhall Gardens. Peter began by explaining that during the early 17th century there were over 600 pleasure gardens in London and they were known as the nursery of English song.

Peter showed us on John Roque’s map of London from 1745 the position of the Vauxhall Gardens bordering the Thames in the South East. 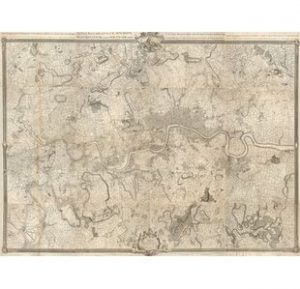 John Tyers purchased the gardens in 1732 and spent four years transforming them. He nearly failed in the first year  as he organised a Redotto al Fresca at which he displayed 5 large paintings illustrating the evil consequences  of self indulgence and drink. This clearly did not go down well with the visitors!

Entry was through a small turnstile which can be seen in the painting above. It cost 1/-, and was fixed for 60 years. Leopold Mozart commented that the entry cost was not high but once inside you would spend much more money on food and activities.

In 1751 Canaletto was in London and painted the Grand Walk in Vauxhall gardens, though it is not an accurate representation, it shows the grand tree lined walks.

After 3 years Tyers realised that music would play an important role in the gardens. Handel said that he would play an organ concerto and organs became very popular so Tyler built and organ house which can be seen in the painting below, behind the open  areas  where  the orchestras  played.  This  area for  the orchestras  was  very small. 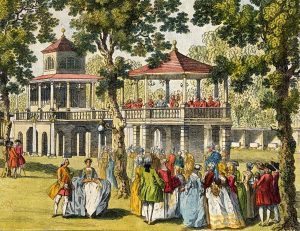 There was a dome structure as you entered – for when  it rained. 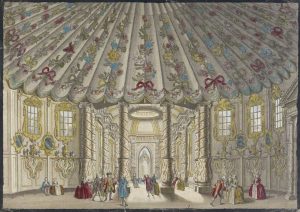 There were two equally popular gardens – Ranelagh Gardens  in Chelsea and the one in Vauxhall. The Vauxhall gardens became more popular for evening activities and would open about 5pm and remain open until the last guest left in the early hours of the following morning. The season for the gardens ran from April until September.

In 1751 supper boxes were built but the food was variable and expensive. This painting by Rowlinson in 1854 shows how the seating in the boxes was arranged so all the diners could look out from the boxes. 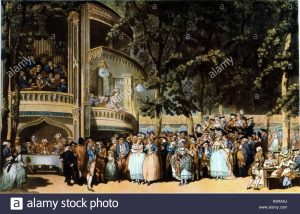 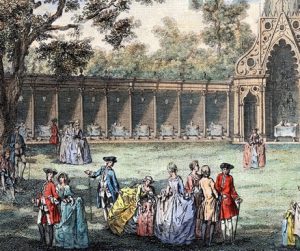 Another of the attractions were the Classical Ruins where everything was an illusion designed to titilate and please as shown in the painting by Rooker after Canaletto – the ‘ruins’ were painted canvas stretched over frames.

In 1737 a statue of Handel by Roubiliac was erected by the supper tables and Tyers used this as a great advertisement. It was a very interesting statue as it showed Handel in a very informal pose and was the first stature to be created of a famous person still living. 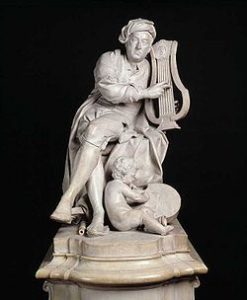 Tyers began to display paintings which he had purchased specifically for the Vauxhall Gardens.

In 1749 Handel’s Royal Firework music was to be performed in Green Park but it was rehearsed in Vauxhall Gardens and in return Tyers loaned his lamps. There were 12,000 visitors to this event.

Though the entrance fee went up to 2/6  this did not deter the people and the queues to enter were incredibly long.

From 1745 singers were constantly employed at the gardens and all performing musicians were always British.

After his death his family continued to develop it adding fireworks and fire balloons to the festivities. 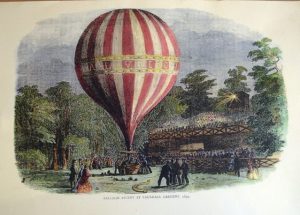 However  by 1840 the owners were bankrupt and the gardens closed. The moving of Crystal Palace in 1854 was the final nail in the coffin for Vauxhall gardens and in 1859 there were several farewell events.

We had been taken on a fascinating visit by Peter giving us an insight into the entertainment of the period.